From Student to Patient to Leader in Finding the Cure 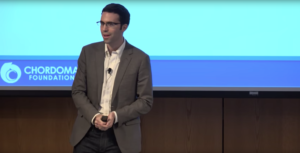 Josh Sommer suffered from severe headaches during his freshman year at Duke University where he was studying civil and environmental engineering. At 18, he learned a tumor was pressing against his brainstem and wrapped around several major arteries.

“I woke up from a long, grueling surgery and the surgeon comes in and tells me I have a chordoma, a malignant bone cancer,” recalls Sommer. “They thought they got it, but I would have a long road ahead.”

It was crushing to learn that, other than surgery, there was little else doctors could do. Chemotherapy is largely ineffective and the average survival was seven years. “I became determined not to accept the prognosis,” he says.

Sommer spent several weeks recovering from surgery, but it wasn’t all about sleeping and watching movies. This curious college student dialed into the Duke University Library to look up medical journals and research his condition. He read hundreds of journal articles. He learned who the experts were in the field and analyzed all the studies he could find on chordoma to get a better understanding of where the research stood in this rare disease.

“Had I not been a student, I would not have had access to 90 percent of the articles,” says Sommer. “It’s ludicrous that someone who is not at a university is at such a disadvantage. It’s wrong.”

Because of his experience, Sommer is a passionate advocate of Open Access. He wonders if he had been diagnosed a year earlier or four years later when he wasn’t a Duke student how things might have turned out differently. “I’m extremely grateful that I was a student. I don’t think it’s fair that others can’t have access to information,” he says.

As a result of his digging, Sommer was able to converse with his doctors about his own care. He’d remember points from journal articles and bring them up for discussion. “Having this knowledge took the conversation to a different level. Physicians and researchers speak a different language,” Sommer says.

At his side all the while was his mother, Dr. Simone Sommer, a physician herself. The two didn’t stop at reading articles for their own knowledge. They began to reach out to those researching the chordoma to share what they had learned and to better network the scientists.

When the scientists realized how well informed the Sommers were, they listened and became more aware of what others were doing in the field. By asking the right questions, urging people to talk to one another and transferring information from one lab to another, the Sommers’ work connected different researchers and has spawned dozens of new research projects.

Sommer returned to Duke and began to join in the quest for a cure as he worked in an oncology lab on campus. He conducts research looking at genes that might play a role in causing chordoma.

In 2007, Josh and Simone Sommer established the nonprofit Chordoma Foundation to develop effective treatments and ultimately a cure for this cancer. In addition to awarding grants, the foundation plays an active role in the entire research process by formulating research priorities, recruiting relevant new researchers to the field, initiating new projects, brokering collaborations, and breaking down barriers to progress. They use information in the medical literature to identify opportunities for chordoma to benefit from recent advances in other more common cancers like breast or lung cancer.

For his work with the Chordoma Foundation, Sommer was recently awarded a two-year fellowship for social entrepreneurs from Echoing Green, and subsequently has taken a leave of absence from his studies at Duke to lead the Chordoma Foundation. To complement these efforts, Sommer has also become a fellow in Duke’s Program on Global Health and Technology Access – a program that develops and evaluates models for innovation, sharing of, and access to health technologies and information.

“I’ve gained so much fulfillment and excitement out of making discoveries, reading articles, finding new pearls of information, calling a researcher and brainstorming…Having a disease and being told there is no cure can put you in a position that leads to disappointment and hopelessness,” says Sommer. “Because I have access to information and an entire support system, I feel empowered to give it everything I have. I don’t think my efforts are futile. I wouldn’t spend 14 hours a day working on this if I didn’t think there was a good chance of finding a cure.”

Prepared for SPARC/ATA by Caralee Adams

Access to Information Can Mean The Difference Between Life and Death

Learn More About Our Principles

The Alliance for Taxpayer Access is committed to increasing America’s return on research investment through barrier-free access to taxpayer-funded research. Our support for public access is based around four key principles: