Empowering The Parents of Patients 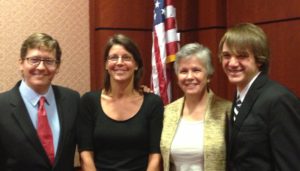 Sharon Terry was desperate for information about the rare genetic condition that affected her two children. But when she tried to find the latest research, she ran into one roadblock after another.

First, there was the challenge of getting her hands on the medical journals. Sometimes Terry would get creative and trail students into the university medical library. Once there, she had to read the articles on site. Another avenue was borrowing a password from a research friend to gain access to a scholarly database or ask a librarian to make a copy of an article through an inter-library loan.

When all else failed, Terry would pay $25-$30 for an article about pseudoxanthoma elasticum (PXE), a rare genetic condition that causes vision loss, premature wrinkling, and cardiovascular and gastrointestinal disease. In 1994, her daughter, Elizabeth, 7, and her son, Ian, 5, were diagnosed with PXE. Terry and her husband, Pat, gave themselves a crash course in genetics to learn all they could do help their children. In addition to medical dictionaries and text books, the Terrys shelled out nearly $1,000 for some 30 articles to get up to speed on the condition.

Without the information they uncovered, Terry says they never could not have found the researchers, located the patients, and eventually advocated for gene discovery and catalyzed research on this condition.

Today, Terry is president and chief executive officer of Genetic Alliance, a nonprofit organization that promotes optimum health care for people with genetic disorders. The Alliance has encouraged all researchers to use open access journals and make all mutations collected available in the database of Genotype and Phenotype (dbGaP).

“I’ve learned that for patients, for families, for individuals affected by genetic diseases and for their providers, Open Access is going to be the key to transforming health,” says Terry. “We are finally going to be able to get what we need because we all understand the basic information and are able to work together to bring real health forward.”

Without access to information, families of individuals with health problems and health care providers who serve them are limited. With Open Access, families can better advocate for their loved ones and scientists can track patterns in research that may lead to advances in care.

“As we move more and more toward the ability to put in these articles in electronic forms, we are going to make more connections,” says Terry. “We are going to understand that this intelligence, this information belongs to everyone – particularly in the case of taxpayer-supported research,” she says.

If scientists could share with one another and the public would interact with them, Terry believes everyone can learn more from each other more quickly. Sharing negative data or experiments that gone awry will also help, she says. Terry urges the next administration to support the current policy mandating research be put in the public domain after six months. She also suggests taking the next step: working to make research immediately available.

“This is an age where things are stale quickly, an age where the science is advancing really fast,” says Terry. “If we could ramp up the system where we are sharing all research, all published results with each other we’d be able to advance research much more quickly… We would see more payoffs.”

Learn More About Our Principles

The Alliance for Taxpayer Access is committed to increasing America’s return on research investment through barrier-free access to taxpayer-funded research. Our support for public access is based around four key principles: